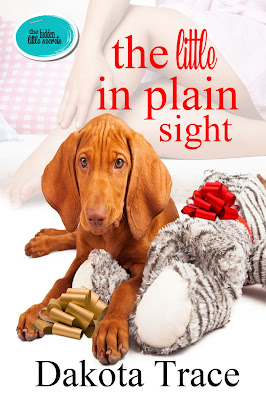 Title: The Little in Plain Sight

If only he hadn’t taken one look at me and recognized what I’ve kept hidden all these years.

Vivica Reynolds isn’t your typical “Little.” Most days she’ll never make Santa’s good girl list. What she needs is a firm hand to keep her bratty side in check. She wants a Daddy Dom who will relish her bratty behavior – and enjoy bending her to his will, even if it means taking her over his knee on a regular basis. But so far, she hasn’t been lucky enough to receive her perfect Daddy, and she pretty sure this Christmas won’t be any different, cause every Little knows Santa only brings gifts to good girls. It should be enough to make any other Little desperate, but Vivica is made of stronger stuff. She’ll just continue to hide in plain sight and hope he’d find her - without Santa’s help.

“If there’s anything I love more than Littles, it’s a headstrong one who needs to be taken in hand by her Daddy."


As Vivica’s godfather, Noah Pearson thought he knew Vivica inside and out, never expecting to run into her at an all exclusive age-play club. He’s even more surprised when he finds out that the sweet little girl he helped raise after the death of her mother, is considered nothing more than an attention-seeking brat. The attraction he’s kept buried in deference to his friendship with her father flares to life once more. Now, all he wants for Christmas is Vivica wrapped up in a bright shiny bow. She may have thrown the gauntlet in the ring with one of her infamous tantrums, but he’s not above showing her how he handles misbehaving Littles. Because this Christmas he's more than willing to take one of the naughtiest Littles he’s ever met in hand. 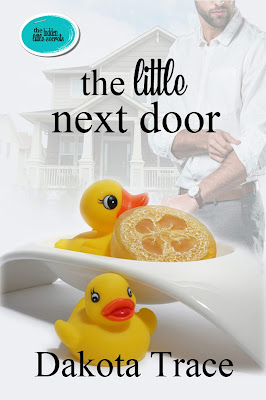 The Little Next Door

They say some things hide in plain sight – particularly the thing you desire the most. Ethan Ramsay had known for years that there was a special someone out there for him – a Little who needed him above all others – he just hadn’t expected her to have lived next door to him for half of his life. As a protector who’d been burned in the past, he’s not quite ready to wager on a good outcome to Sloan’s sudden reappearance, but how can he turn away the vulnerable Little he senses lurking behind her troubled eyes?

Sloan Kettering was a woman down on her luck – all because she’d dared to put on paper what she longed for the most. Now, homeless, jobless and ready to throw the towel in, she gambles one last time on the boy next door. Or rather the man he’d become. Chef Ethan Ramsay may have been her childhood friend, but Sloan wasn’t sure how to deal with the man he’d become. Every part of her imagined what it would be like to have a Daddy Dom, but could she handle the reality of Ethan’s brand of dominance? 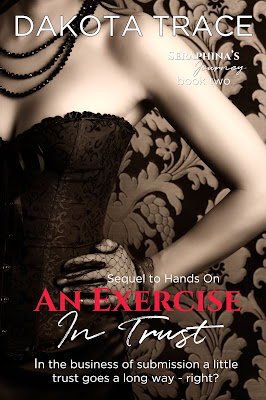 An Exercise In Trust

In the business of submission a little trust goes a long way - right?

To say Seraphina Blackburn has serious trust issues is an understatement. A career driven woman who’s closer to fifty than forty - she’s relied on upon herself for years. She learned the hard way that trusting the wrong man was a one way ticket to heartache. Instead she focused on her job. As a senior ad exec, she has it all - or so she thought until one fateful February night, when an arranged adventure proved how wrong she was. Its been months since then, and while she enjoys the time she spends with her sometimes dominant, Caden King - there’s something missing and just not the scorching hot sex she knew they’d have - if she could ever figure out a way around his no sex rule. Surely the connection she feels isn’t just a product of their power exchange - or is it? There’s only one way to find out - if she’s not too scared to take the plunge.

Caden King, may not have Seraphina’s trust issues, but the demons riding him are just as vicious. A proverbial white knight with a high dose of kink, he’s been popular in the BDSM communities for years. Abused sub? Have Master Caden work with her. Your sub needs a heavier hand than your willing to dole out, so she can cry - ask Master Caden - he’s an expert with a whip. Need a hand with just about anything? Call Caden and he’ll be there. Sometimes he wonders if the only reason people friend him is for those white knight tendencies - and the fact he just can’t say no to a person in need. Quite the oxymoron for an in-demand dominant - but something about himself he’s begun to accept. And one of the reasons, he refuses to jump in bed with anyone he plays with. If a woman’s in his bed - it’s because she wants him - not just what he can offer her.

With the Fourth of July, right around the corner fireworks aren’t the only thing that is going to light up the night. Can Caden and Seraphina overcome the odds and end up together? Or will their personal demons drive them apart forever?