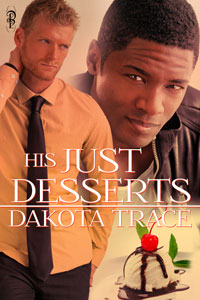 Growing up in a foster home in a small Midwest town, Sean Whitcomb planned from the day he turned sixteen to somehow escape. And he does to the big city of Des Moines at a lawyer’s firm. Now up for a shot at a partnership, Sean needs to deliver the goods, and it's not what he thinks. No, it's family style meal for the founding partners and their spouses. Which causes Sean a major issue, because not only is he single gay man, but he can’t cook to save his life and his boss is expecting a home cooked meal – complete with a family or there will be no partnership offer.

In desperation, Sean turns to the man he left behind in his pursuit of the golden ring, Isaiah Waterston. Not only is Isaiah hot enough to still turn Sean’s crank but he’s also a world class chef at one of the hottest eateries in town. Now all he has to do is convince the man he’d left behind to give him a single night of his time, prepare a mouth-watering meal and pretend to be his lover for a few hours. Sounds easy right? Well it is until Isaiah attaches his own stipulations – he wants an entire weekend with Sean at his mercy. 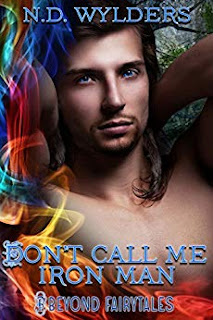 
BUY from AMAZON
BUY from Barnes and Noble

BLURB:
Once upon a time...there was this guy. A man who had an IQ out of this world and was arrogant enough to give the legendary Tony Stark a run for his money. He had everything he could ever want—a good job, more money than he knew what to do with, and all the sex he wanted—no strings attached. But that all changed on one fateful night...

The last thing Ivan Chugunov expects when he drop by his favorite haunt for a few brews is to be entertained by a mysterious storyteller. But as he listens to the man's tale of a prince and an oddity that went by the name of Iron John, he finds himself lost in the story...only to awaken in another realm—one with a quest—for him. Repair the purifier vital to all those who lived and retrieve a medical unit. Seems simple enough and a small price to pay to return to his own time.

Well, until he finds out that said 'LT-1789 unit' is actually a reclusive cybernetic man. One who will demand his own price of Ivan—three nights of unbridled sexual bliss...with Ivan at his mercy. Only then will he return to the royal clutch.

Can Ivan, a man who relishes control above all else, submit to a man who may be more machine than human? Kaholo's Seduction: Hawaii
Toby has lived a sheltered life, first with his Amish family, then living in a small town in Ohio, but he's escaped all that when his job transfer lands him in the tropical paradise of Hawaii. Not only does he feel free for the first time as he touches down in the Islands, he also is able to explore his hidden need for a male lover. But when Koholo, a native, is willing, will Toby overcome a lifetime of teaching to take what he wants?


Aiden has planed this trip to Jamaica with his college buddies for months, only to have them stand him up at the last minute. Undeterred, he decides to go without them. He needs a break from his hectic doctor practice in Miami. Once on the golden shores of Jamaica however, relaxing isn't the only thing on his mind when a half naked man runs up to him in need of a doctor. But after Aiden has helped the man's younger sister, he's finding Camis to be more tempting than he can resist.


Juaquin has lusted after Daniel from afar for years. The sexy norteamericano has come down each summer with his family, but this time Juaquin was going to make sure it was different. Daniel would still choose a man to take up with for his stay, but this time Juanquin was going to make sure it was him. He wa going to lure the man away from his usual playthings. Daniel would be his this time.

Ruben's Yearning: Cozumel
At his college roommate's insistance, Joel decides to spend the summer on the beatuiful beaches of Cozumel. He never expects that Ruben has ulterior motives for his invitation, until the night that a tropical storm drives Joel into Ruben's arms. Now all that is left to see, is if Ruben's yearning for him matches Joel's own desire for his dark sexy roommate.